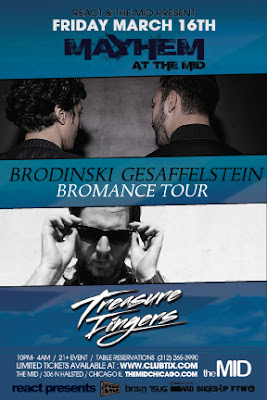 CHICAGO, IL — This Friday, March 16th, the Bromance Tour will hit The Mid.  Performing will be head of Bromance Records, Brodinski, young-gun and techno lunatic, Gesaffelstein, with strong support from the always-lovely Treasure Fingers.  I had the pleasure of seeing Brodinski spin unannounced at a small, impromptu Ed Banger party last March in Miami, and I’m here to tell you that this man is a world-class party starter.  On the decks, Brodi casually glides through genres: rap, techno, electro, tech-house, and everything in between to get you dancing.  In Miami, I remember him getting on the mic to inform us that we were about to hear a new track from a friend, before unleashing it, sending the crowd into a drunken frenzy.  The friend he mentioned? None other than Gesaffelstein.  And to think that these two Frenchmen are being supported by Treasure Fingers is simply ridiculous; TF never fails to impress with his overall disregard for sub-genre barriers and his devotion to playing only the freshest and funkiest dance music.

But wait, there’s more! If you tweet @br1ghtshiny between now and Thursday at 9PM, you will be entered to win a pair of FREE TICKETS to the show.  All you have to do is tweet at us, mention the show, and you’ll be entered to see Brodinski, Gesaffelstein, and Treasure Fingers spin live at The Mid for free!  There is not a limited number of entries per person. Event details and some bonus trax after le jump.